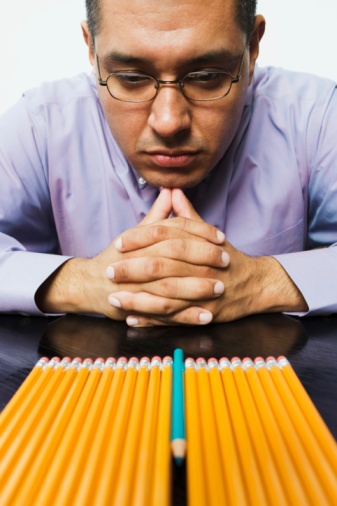 “Following all the rules leaves a completed checklist. Following your heart achieves a completed you.” This quote by author Ray A. Davis may be a bit of an oversimplification, but it carries some significance, too. Some people are attracted to breaking rules and live their lives accordingly. They are typically acknowledged as either highly successful people or scoundrels. But in any case, they are people who choose their own paths instead of following the well-beaten trails of life. Many times they are revered as leaders. However, not everyone is cut out for rule breaking.

This may be the key difference between two very different types of leaders. One is devoted to organizing procedures and processes and directing operations and the systems that make them functional. The other is primarily engaged in creativity and the positive influence of others. As such, these two types are differentiated as managers and visionaries. Some individuals are fortunate enough to have both of these capacities, but most of us, if we are leadership material at all, fall into one of these two categories more so than the other, and that is not a bad thing. The world needs both types of leadership.

Perhaps the most important difference between these two is that one of them is routinely devoted to following the rules, or at least helping to make and institute those rules. The other is largely committed to finding ways to circumvent the same rules, exploring new ground instead of restricting one’s latitude to a structured set of limitations. One follows the rules; the other seeks to break them.

Looking at these two individuals we can see some very clearly defined differences. The one who seems born to be a manager is focused on technical aspects and structural adhesion. He is committed to smoothness in operation and well-practiced efficiency. Everyone usually acknowledges that he is quite good at what he does.

The other is visionary in his approach to problem solving, so his solutions are not always popular. He is, instead, a bit of a maverick. But his ideas can be so very convincing sometimes, usually due to his emotional involvement and vision. In a word, he is passionate, and his passion is contagious. He is an idea factory.

Successful entrepreneur and co-founder of Twitter Jack Dorsey said, "Everyone has an idea. But it’s really about executing the idea and attracting other people to help you work on the idea.” The idea for Twitter was amazingly simple. It was also untried. The "idea people" attracted some management types to make it happen…and the rest is history.

Successful organizations usually require both types of leadership, the idea generators and the systems people who build and pattern the formula. Successful World War II general and U.S. President Dwight D. Eisenhower said, “Leadership is the art of getting someone else to do something you want done because he wants to do it.” That, in a nutshell, is the path of the idea creator, the entrepreneurial genius, the visionary leader who starts the engine and motivates it to keep running.

True leadership may begin with a breaking of the rules, but it can only truly succeed by virtue of learning one’s real limitations and finding help in those areas of relative weakness. Break the rules to get started, but then find help covering your weaknesses from another kind of leader, and your chance of success is increased.